Meat, it is the one thing in the world that everyone loves, except for vegetarians. We love it whether its grilled, fried, steamed, boiled and in as a delicacy in Ethiopia, Raw. These days meat will come packed and frozen in the grocery store or bloody and fresh from the market. Nevertheless meat has been distributed to us in such a way that we people are completely detached from the killing. We live at least miles away from the nearest slaughterhouse; we are distant from the dry screams of dozens of cows, chickens and pigs being freshly slaughtered every day. Of course for the many meat lovers of the world, the taste of freshly killed meat is completely different from the frozen grocery type or bloody market meat. Also meat that wasn’t fed processed feeds tastes completely different from meat that has grown in the wild. That’s where hunting comes in, the thrill of hunting is probably instinctive but then hunting brings out the reward of fresh gamey meat. But of course hunting is not easy and one way to ease the burdens involved in hunting is to bring along a hunting dog and that”s where Border terrier dogs come along.

Though like many small dogs border terrier dogs are stubborn and brave. Though they are not very aggressive, border terrier dogs are known to chase smaller animals because of their hunter instincts. This poses as a threat to their health as they will sometimes eat toys or destroy household items which sometimes lead to various health problems usually involving indigestion.

Despite their hunter instincts, and their tendency to eat different household items owning a border terrier dogs can be rewarding. They make good companions for children and just in case you want to take up hunting, its good to have a Border terrier dog around. 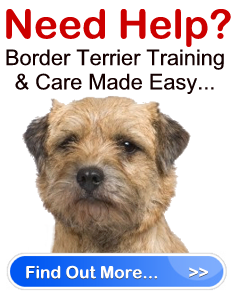